THE BUZZ ON INSECT REPELLANTS 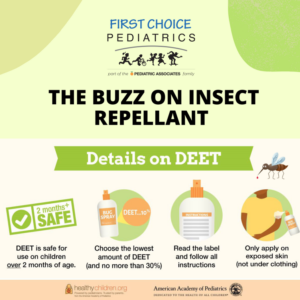 Biting insects can make children miserable and be worrisome for parents, as well as cause serious illnesses. According to the CDC, insect-borne illnesses are on the rise. Insect repellants don’t kill insects but work by keeping insects away from the person using them like mosquitoes, ticks, fleas, chiggers, and the ever so popular Florida midges known as the No-See-Ums. Remember that repellants are not effective against stinging insects like bees, hornets, or wasps, so don’t forget to update your patient’s Epinephrine prescriptions!

Here are some insect repellants approved by the Environmental Protection Agency (EPA):

3. Permethrin– first registered in 1990 for use as a repellent on clothing by the military. Permethrin 0.5% spray is often                   used to treat gear (such as boots, pants, socks, and tents). Permethrin-treated clothing provides protection after multiple           washings. Although it is indicated for the treatment of lice, Permethrin should not be used directly on skin for the daily               prevention of insect bites.

Here are some quick suggestions to share with your patients:

Have you ever heard of STARI (southern tick-associated rash illness)?

Like the rash of Lyme disease, STARI has been seen in humans following bites of the lone star tick, Amblyomma americanum. The bite is often described as an expanding “bull’s-eye” lesion that develops around the site of the bite. The rash usually appears within 7 days of being bit and expands to a diameter of 3 inches or more. The rash may be accompanied by fatigue, fever, headache, muscle, and joint pains. Because the cause of STARI is unknown, no diagnostic blood tests have been developed. It is not known whether antibiotic treatment is necessary or beneficial for patients with STARI. Nevertheless, because STARI resembles early Lyme disease patients are often prescribed a course of Doxycycline. 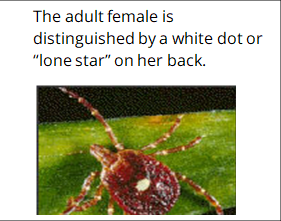 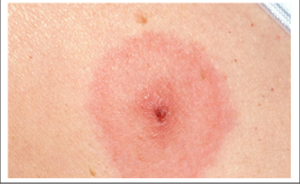 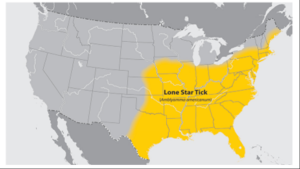 Helpful Tips and Methods to Help Prevent the Spread of Infections

We have multiple locations for your convenience. For more locations that may be close to you, please visit www.pediatricassociates.com/locations