Placing our patients first in every situation and delivering extraordinary quality care. 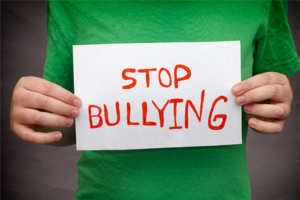 October is National Bullying Awareness Month. Bullying is something you have either experienced or witnessed. It occurs in many different social circles varying from home, the playground, school or the work place.  There is a question as to whether bullying is increasing in frequency or whether it is just better documented with changes in social media use and increased awareness.

Bullying is defined as repeated negative behavior by one or more individuals aimed at a person who is perceived as being weaker or more vulnerable. Bullying may include1:

Bullies and bullying victims need to be identified so they can receive the help they need. It is critical to correctly identify bullying as it can have long term negative effects including risk for2:

Victims of bullying can present in many ways that can be confused for school avoidance, negative behavior, or mood disorders. Common symptoms often reported by children who may be experiencing bullying include:

It is reported that 14% of boys and 9% of girls in the United States are involved in bullying. The percentage of students who are bullied is highest at age 7 (second grade) according to surveys done in children in second through ninth grade3. In general, children who are bullied will tend to be anxious, insecure, quiet, timid, passive, or have low self-esteem. Bullies are often aggressive, confident, have good or average self-image, are rewarded by social influence, and show little empathy or anxiety.

Bullying can happen to anyone. There needs to be a zero-tolerance policy regarding bullying based on ethnicity, race, gender, religious beliefs, or other personal attributes. Children should be encouraged to report bullying and receive the help they need. On the other hand, children should be discouraged from reporting false negative behavior just to get others in trouble.

There are a few things you can do to assess if your child may be affected by bullying:

Given the negative effects of bullying, the earlier the intervention, the more positive the outcome. Encourage children to participate in social skills and etiquette classes. Here are a few things you can do to prevent bullying:

If you want to learn more on bullying and how to help, below are a few helpful links:

ADHD: When to Worry, What to do

Who Can Help Me With Breastfeeding?

Seven Ideas to Keep Your Kids Busy During the Summer

We have multiple locations for your convenience.